With Thanks, a Tough Goodbye

Last Thursday, May 12, a Memorial Service was held for my dear friend Bruce Lee, ‘Mon Oncle’ as I sometimes called him. 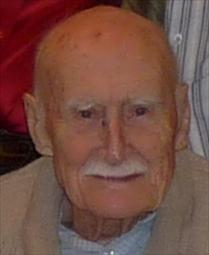 Bruce lived in and I am currently living in . Once again not only the pain of saying goodbye to a friend, but of not having seen them, shared a meal or outing for many months. Phone calls, e-mails and letters help but are rarely a true connection.  Too often while I have lived one side of the ocean or the other or in another province this has happened; the heart-ache never lessens.
Bruce would have celebrated his 95th birthday in November, and celebrate is one word all his friends would have used about his life. An amazing home renovator-re-builder, stained glass artist, self-taught craftsman in many media, he was able to bring a master’s touch to every project he worked on, and they were many. 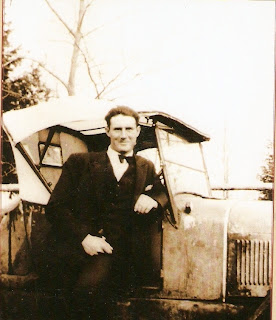 Born in , Bruce grew up on his family’s farm during the hardscrabble days of the Depression. As you can see he was a good-looking young man, and stayed handsome. One of three boys he was interested in the quilts of those days; the patterns and fabrics. A detailed description of these early years is related in his memoir, self-published when he was 92.
I first met Bruce and Joyce, his wife, almost 30 years ago when we all lived in . They were across the street neighbours who quickly became good friends. After Bruce had come east and worked in and , and travelled a great deal, they came to and bought Duncan McPhee Interiors, located in a lovely mid-nineteenth century building. From this ideal location Bruce and Joyce sold exceptional furniture, upholstered and wood, sophisticated home accessories and gifts as well as art and framing supplies.
Most of the wallpaper and curtains in my house were from the Lee’s store. I still have some of the curtains and as I look around our home here just about all the artwork has Duncan McPhee frames. Tonight at dinner I remembered buying the place mats on a trip to Elora with Bruce, probably on a visit when living back in . Bruce also persuaded me to buy the blue and white striped sheets we sleep in.
We shared a mutual love of art, the arts – Joyce, like me, loved ballet – and antiques. My first foray into selling antiques at the well-known Aberfoyle Antique Market outside was supported and success inquired after. Later when I expanded to ’s Harbour Front and other locations Bruce advised and sometimes helped with small restoration jobs.  Through this I met the Canadian war artist Will Ogilvie and his wife, who lived behind the Lees, and sold some items for them as well as buying from them myself. 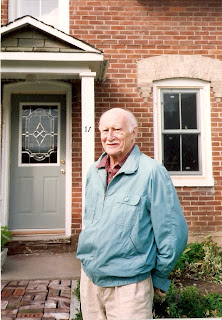 This photograph was taken visiting my former antiques partner Frances who had moved to Warkworth, Ontario
Bruce modestly said he was “handy with tools”. Possibly the understatement of the century. From the renovation, almost a re-design, of , the Lees lived in a multi-storey town house in before moving to a period house on . There Bruce made forty windows many with stained glass, built a new garage with a two-storey addition above, finally giving Joyce her weaving room.  Lastly there was Stonegate, where we once again marvelled at his amazing and meticulous work that transformed a basic house. The man was handy!
Joyce and Bruce bought a small home in Dunedin, and we were fortunate to visit there. Bruce loved a bargain and outlets as much as I do, so it was always happy hunting.
Sadly Joyce died in , while Bruce was driving her to hospital. Once again I was in when this happened. On a visit later he gave me some of her weaving wool and pieces she had woven. Treasured.
‘Mon oncle’ came into being one time I was visiting from . Out for dinner I knew it would be almost impossible to persuade Bruce to allow me to pay, to repay him for his hospitality and friendship. As we ordered our wine I went to the ladies room, an excuse to tell our waiter I would do the same after dinner and would he have the bill ready, as ‘my uncle’ would certainly want to pay. The ruse worked perfectly. Though Bruce did admit as we left laughing he had wondered about my waterworks. 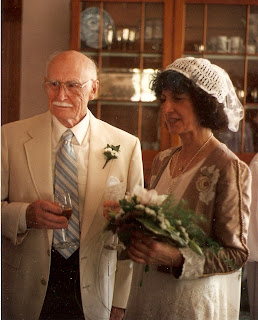 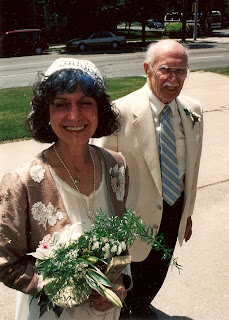 The most important day we shared was when Bruce escorted me down the aisle in to marry my husband Gary. A happy day. A good memory.
Many good memories. Thank you, Bruce.
Posted by bluetulipstudio at 6:54 PM 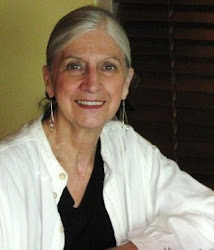